STREAM is our school's effort to teach science, technology, religion, engineering, art, and math concepts, and to integrate them throughout our school's curriculum.

The St. Peter WiredCats Green and WiredCats Blue Middle School FIRST Lego League Robotics teams participated in the NC FIRST Lego League Championship tournament at NC A&T State University in Greensboro on January 15, 2017.  Of the 120 teams in the two-day event, the WiredCats Green had the 10th highest score in the autonomous robot game competition.  The WiredCats Blue received a judging callback because of their strong performance in the Core Values area.   The WiredCats FLL teams, comprised of 6th-8th graders, were started this school year and are part of the school's STEM approach.  Each of the St. Peter 6th-8th grade FLL teams has been practicing after school multiple times per week since August in the school’s art room.

The WiredCats teams qualified for the state championship because of their performance at the Winterville FIRST Lego League (FLL) Qualifying Tournament on November 5th, where they were among eight teams selected from the twenty-eight that participated.  The Green Team won the Strategy and Innovation Award at the Winterville tournament.  On the robot competition table at the Winterville regional, the Green and Blue teams placed fourth and sixth, respectively.

At an FLL tournament, teams are judged on their project (an engineering design project that proposes a solution to a problem), core values (how well team members work together as a unit and their "gracious professionalism"), and robot design (the quality of a team's robot design and programming). This year's FLL theme is "Animal Allies", which involves humans and animals working together or helping each other. The research project and the robot table game both reflect the theme.   Also, teams' robots compete for points on the competition tables.

The St. Peter teams are coached by John Bell, the St. Peter art teacher and head coach, and Dr. Valerie DeBellis, assistant coach.  Dr. Rob Hochberg, a robot programming expert, and Allanah Napast, a high school FIRST Robotics team member, served as mentors this season.  At the Winterville regional and at the state tournament, team parents served in a variety of volunteer roles.
​ 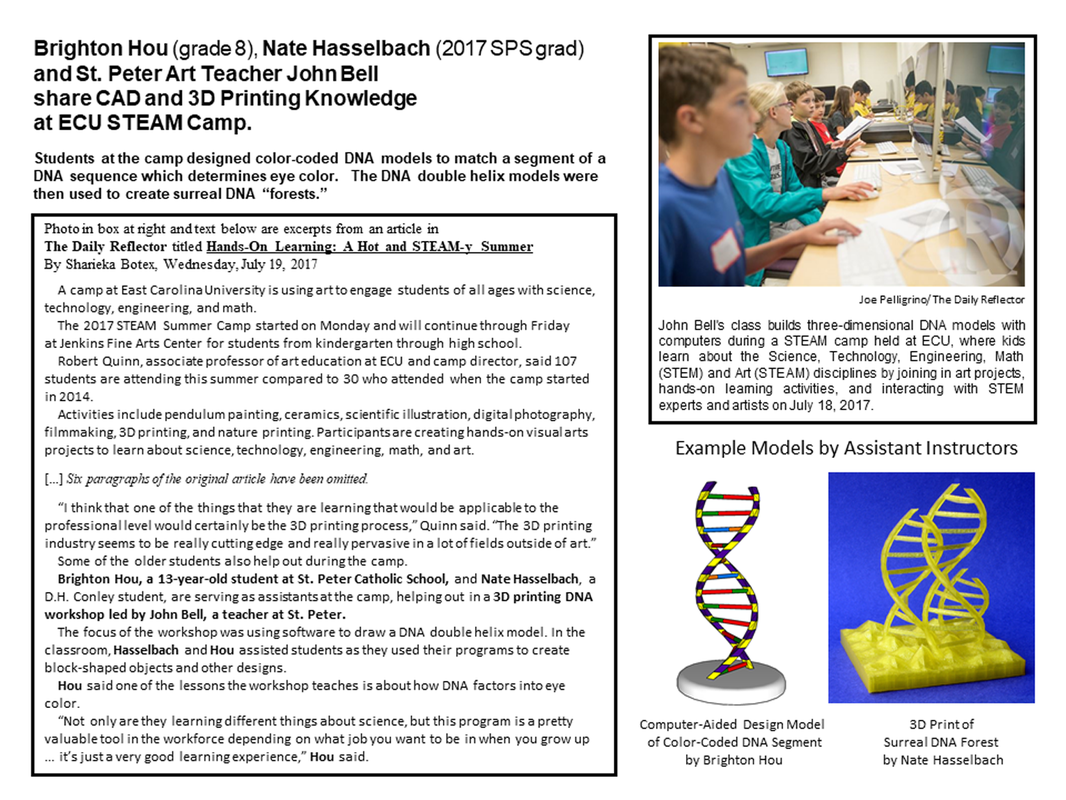